Been a while since I updated this Blog. His a quick update. Lately, I have been refining my portfolio. I update my website and a new reel is on the way. I'm taking my concept designs as well other people designs and making them in 3D. I'm working with a small company making online and mobile games. You will more examples of that when games get release. All in all, I been keep the drawing hand busy and the mind creating. Here a few things I have worked on since I lasted posted:

And here a quick W.I.P piece I work on for New Year Eve: 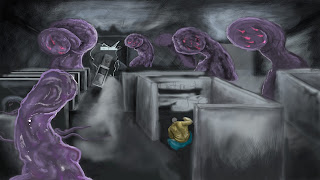 Posted by Sherman Waysome at 4:04 PM No comments: 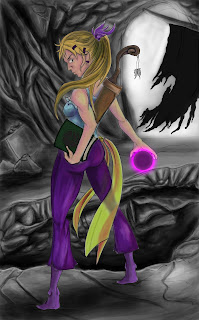 Here's an character of mine that I decide to modernize to what new look I could come up with. Was actually my first from school. Looking at this it's good to see that I come quite ways from how I used to draw. The tedious part was really the background. Still debating whether I should keep it like this or add color to the background with some effects for the post.  Line art is pencil. Ink in Sai. Colored in Photoshop.

Elma the sorceress. Sister to Con, Daughter to Symphony and Calm. Her soul purpose is to cleanse the world from the tyrannical rule from her demon possess father and brother and to avenge her fallen mother.
Posted by Sherman Waysome at 12:20 AM No comments:

Here I am making a custom wallpaper for my desktop of PC. Because I figure it would be coolo if I had something I created every now and then rather than constantly change wp from different things. But, in the process I realize that I haven't really beefed up any other characters besides the standard one that I'm use to drawing, sketching and painting. So, I look into refining another one of my characters that I love. As I did with the dagger I wanted to push details time and somewhat provide a challenge for me (meant not just line art and vector). I decided to paint him as a light/shade. Though he's permanently pale like that.

Enter Arc Keyou. Once to believe to be the step to Human Evolution since decade had a freak accident when he was promised and shown the land above the lab in which he was manufactured. It was his reward for being a such a genuine and calm subject. To his dismay, when Arc stepped out to embrace the sunlight his temperature exponentially accelerated causing him to spontaneous combust. Covered in flames the Arc, retreated back in the depths of the lab. Aggravated and enraged Arc's personality shifted from calm and cool to rebellious and chaotic. Their was an unfortunate accident that force Arc to relocate to the frozen tundra in Russia. It is there where Arc is able yo walk on the surface both day and night without fear of busting in flames.

Posted by Sherman Waysome at 12:47 AM No comments:

No Room for Calamity

So you think that after drawing something for a quite a while you would understand it works and how it would look in the reality. Funny is that the 2D concept is never an accurate source to go off of. Working on recent projects I realize that. So I decide to see how something I made in 2D space would come out and how it would work as a little break from the things I been on recent.

This is how it suppose to transform from dagger to sword form on the fly.

It's fun working small stuff like this because I can see how much I pay to attention to detail. Plus, it helps influence how I design things. I'm going to start back posting a little frequent then I've been doing. Not a daily thing but perhaps something recent. I wish I could post the other stuff but that's top secret now. Working on getting my site back up too. It's a bit in a redesign stage. Until next time peeps.

Just the gloves and buttons on the jacket along with the backpack and it on to texturing. I am also working on putting together a reel for this month of all my update stuff. Wish had a better computer.
Posted by Sherman Waysome at 11:58 AM 2 comments: 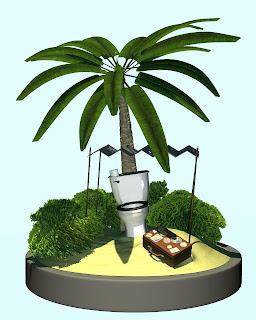 Last WIP before the finish just have to fix the transparency on the bushes and tweak the sand the tree a little bit more. The Background will be in post.
Posted by Sherman Waysome at 2:31 PM No comments: 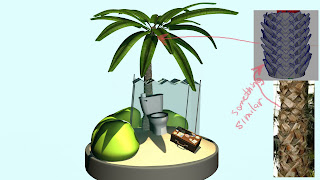 I'm finishing up the touches for the tree. Add few details to the top of the tree. Like the scrubs. Will work on the bushes and the adding a little more detail to the suitcase. Anyone looking at this, how would you go about an intense shadow to show underneath the shed? Right now I have a geometry texture transparently. Still trying to figure out what the background gonna be. Most likely abstract.
Posted by Sherman Waysome at 12:57 AM No comments: